If you get a text message saying you’ve come into contact with someone who’s tested positive for Covid-19, don’t click the link.It’s a scam, officials say.Warnings about such texts have been circulating from Kansas to Maine. And it’s just one of numerous coronavirus-related scams that local, state and federal officials report are attempting to prey on vulnerable Americans.

Law enforcement facing onslaught of coronavirus scams that could last for yearsText messages and robocalls offering testing kits, bogus treatments or financial relief and claiming to be from government agencies have been reported to the Federal Trade Commission (FTC) and other government agencies. Other text message hoaxes may instruct people to stock up on supplies. And now that stimulus checks are in the mail, scammers are trying new tactics to get their hands on that money and people’s personal information.The FTC, the main national agency that tracks and responds to alleged consumer scams, has already collected more than 20,000 complaints from all 50 states related to coronavirus, according to data the agency released last week. Almost half of the complaints from consumers say they’ve lost money, at a midpoint of about $560 per reported scam.Here are some common scams floating around and how to avoid them.

Feds uncover an alleged scheme to fraudulently sell 39 million N95 respirator masks to US hospitalsThe message then contains a website link that claims to provide information.Kansas authorities cautioned residents not to respond to the message or click on the bogus link, instead recommending that they contact the attorney general’s office or local authorities.The Thomaston Police Department in Maine is among authorities warning about this particular scam, sharing a photo of a similar text in a Facebook post.”DO NOT click the link! It is not a message from any official agency. It is however a gateway for bad actors to find their way into your world,” the police department said in its post. 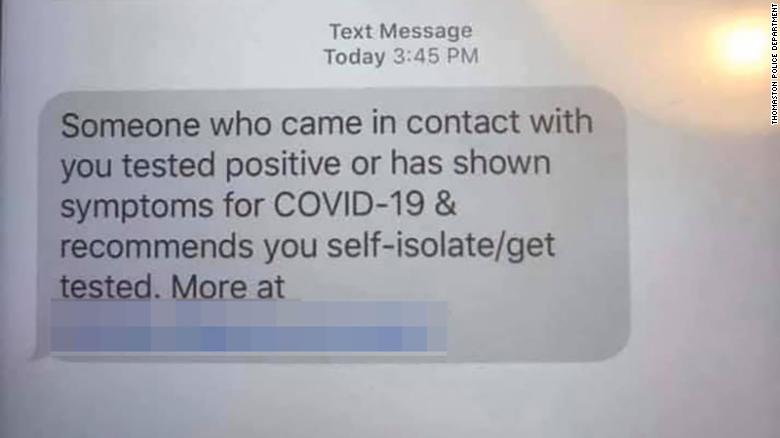 This is an example of a scam text that should be ignored, law enforcement officials say.Thomas Eagar, a patrol officer with the department and a fraud investigator with Maine’s Department of Health and Human Services, told CNN he encountered the picture, which was taken in Texas, through the health department’s fraud investigation unit.

The fake messages from government agencies

Be on the lookout for emails, text messages or calls that claim they’re from the US Centers for Disease Control and Prevention, the World Health Organization (WHO) or other governmental agencies.Here’s one robocall reported by the FTC claiming to be from the Social Security Administration:”Hello. This is a call from the Social Security Administration. During the difficult times of the coronavirus, we regret to inform you that we have got an order to suspend your socials immediately within 24 hours due to suspicious and fraudulent activity found on your social. We are contacting you as this case is critical and needs your urgent attention,” the caller says, followed by a phone number that the recipient is urged to call for more information about the case.One text scam that the Federal Communications Commission says it recently learned of claims to be from the “FCC Financial Care Center” and offers $30,000 in Covid-19 relief — even though the FCC is providing no such relief to consumers. The agency says the text is “likely a phishing attempt to get personal or banking information from unsuspecting victims.”